Around the year 1820, Edmée and François Ganne set up a grocer’s shop in the hamlet of Barbizon. In 1827, Jean-Baptiste Camille Corot discovered the village, paving the way for other painters to come here, including Théodore Rousseau and Jean-François Millet. 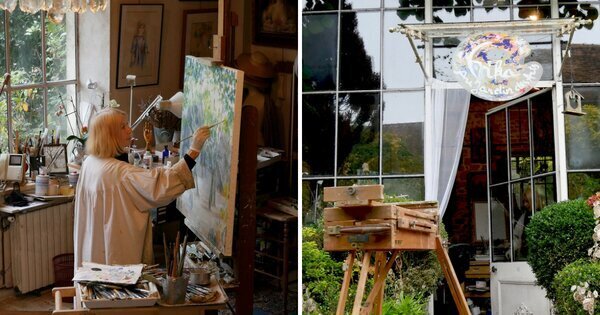 A whole generation of young artists decided to paint “from nature”, leaving their studios to work in situ, like their two great English precursors, John Constable and Turner.

A village of artists

The invention of the paint tube, which gave them the freedom to paint where and when they wanted, the refusal of the Paris salons to exhibit naturalist paintings, the political climate, the cholera epidemic, the outstanding luminosity and the wealth of subjects to be painted all contributed to the decision by numerous artists to quit the capital and freshen up their palettes in the country.

The Gannes’ grocery shop-cum-inn became a gathering point for a whole bevy of painters nicknamed the “peint’à Ganne”, who were to change the future of the hamlet of Barbizon. From 1845, certain artists were regular visitors, while others, such as Théodore Rousseau, Jean-François Millet, Narcisso Diaz de la Peña and Ferdinand Chaigneau, settled here permanently. Between 1830 and 1875, hundreds of painters, sculptors (French and foreign) writers, journalists, great names from the Parisian theatre scene and politicians met, mingled, holidayed and lived in Barbizon !

This early period ended with the closure of Auberge Ganne – the role of which was taken over by the Villa des Artistes and the Exhibition Hotel, founded in 1867 by the wood and coal merchant Emmanuel Siron (“Hôtel Siron”, now called “Le Bas Bréau”) – and the death of Jean-François Millet in 1875. Other artists of every discipline, famous and unknown, continued to flock to Barbizon.

All kinds of commerce – art galleries, artists’ studios, hotels and restaurants – developed here over the years.

The Musée des Peintres de Barbizon is settled in two historic places : the auberge Ganne, where many artists stayed between 1820 and 1860, in order to find inspiration thanks to the surrounded nature; and the Theodore Rousseau’s house-studio, where this artist lived the twenty last years of his life.

The name of the school was taken from the village of Barbizon, on the edge of the great forest of Fontainebleau near Paris, where the school’s leaders, Théodore Rousseau and Jean-François Millet, driven from Paris by poverty and lack of success, settled in 1846 and 1849, respectively. They attracted a large following of landscape and animal painters, some going to live at Barbizon, others visiting only infrequently.

The Auberge Ganne recreates the atmosphere of this period, thanks to its furnishings and décor painted by the artists during their time here. The permanent collections contain around 100 works by less well-known artists of the 19th century as well as paintings by artists including Jean-François Millet, Narcisse Diaz de la Peña and Rosa Bonheur.

Le Musée Jean-François Millet was in the studio of the painter. He painted the scenes of rural life found in The Angelus, The Gleaners, Man with a Hoe and The Sower. This period house is home to personal effects belonging to the artist (letters, drawings, engravings, etc.) and a collection of original works by the old masters of the Barbizon School.