We hope you will appreciate wonderful events in Pays de Fontainebleau. It is another way for you to discover the beauty of the area !

Exhibition: The emperor’s house. To serve and magnify Napoleon the first

From Avril 13th to July 15th I Château de Fontainebleau

On March 18, 1804, Napoleon Bonaparte, First Consul, was proclaimed „Emperor of the French“. Throughout his reign, the emperor surrounded himself with a splendid „House“, a sort of close entourage, worthy of his imperial title. Dedicated officers and faithful servants organized the daily public and private life of Napoleon I and contributed to the widespread influence of the regime. Portraits, ceremonial clothes and sumptuous works of art represent a new angle to rediscover the Napoleonic adventure.

This exceptional ensemble of almost 100 works of art resonates with the Napoleon I Museum and allows a new approach of the visit of the palace, this privileged witness of court life under the First Empire.

This event is dedicated to nature, dogs and horses ; it is the occasion to participate with your family and friends to many games and shows.

During this weekend at the Grand Parquet, you will enjoy : 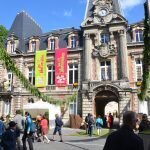 Discover an event dedicated to nature and environment. You will enjoy a flowers market, a eco-shops village, animations and playgrounds.

During three days, the Festival organizes free meetings, visits, concerts and exhibitions in the Château and the city of Fontainebleau, and in Avon. Whether you are a professional or an amateur, you are welcomed !

Featuring 100 photos of this visual storyteller from around the world, this collection aims to bring together the similarities of the human being through portraits of children. The ami of this exhibition is not to distinguish superficial differences, which are simply the result of chance that leads to hostility between peoples, but feel a sense of empathy and compassion around these countries prone to violent conflicts.

Celebrate the summer with music in a convivial atmosphere.

During four days, the Master Pro is the occasion to meet the best professionnal horseriders !

Série Series is the appointment of the european series and their creators. It is a unique event during which the public meets the production teams.

Let’s celebrate the Festival’s 50th edition, THOMAS DUTRONC, IBRAHIM MAALOUF, PAROV STELAR, CYRILLE AIMÉE and many more will be on the big stage in the Chateau de Fontainebleau park, an exceptional natural setting!

The Grand Parquet is a place for big equestrian events, let’s meet champions of show jumping, dressage and cross.

During this great event, you will attend  to various championships :

It is the must-see event for the equestrian fans and professionnals. You will meet 1.850 horses from 2 to 7 years old, ready for show jumping and Style Hunter.